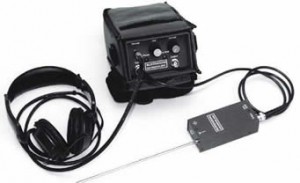 The BLOODHOUND operates by detecting the audio signal from a microphone and subjecting it to high amplification with elaborate filtering to remove extraneous noise. It has the ability to be operated in either of two modes, covert or overt.

In a covert mode the operator uses the filter and headset units to listen for room noises as detected by the eavesdropping microphone.

In overt mode the power amplifier is added to the system. If the probe detects a microphone the system goes into acoustic feedback and a characteristic howl is produced.

Detailed presentations and operational demonstrations available on request, please use links below.