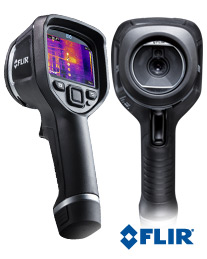 THE NEW FLIR E6 IS IDEAL FOR ECM USE

With high thermal sensitivity built into the E6 this thermal camera can be used to spot incredibly minor differences in temperature, making each image captured much more accurate.

This makes it much easier to spot the heat signature in smaller components, spot temperature differences that might otherwise have goneunnoticed and further enhances the detail of thermal images (combine with FLIR MSX for the best effects!).

In our opinion the E6 is the most cost effective solution for Thermal Imaging equipment for TSCM teams.

GET ALL THE DETAIL YOU NEED WITH THE E6

If you’ve used a thermal camera before, you might have noticed that sometimes thermal images are a bit lacking in quality, making it hard to determine what you’re looking at.

This is because standard thermal images don’t use visible light to make an image, missing out some of the detail you’d expect to see on a standard digital image. To combat this FLIR has developed MSX (multi-spectral dynamic imaging), a feature that actively takes a digital and thermal image at the same time and blends the two together in real time to create a hybrid image that has the temperature detail of a thermal image and the intricate detail of a standard digital image.